all of my adventures, mostly dogs, food, and good vibes.

In honor of my darling Serena’s birthday, I baked these cupcakes for her “surprise” dinner at Tartinery. Happy 26th doll! 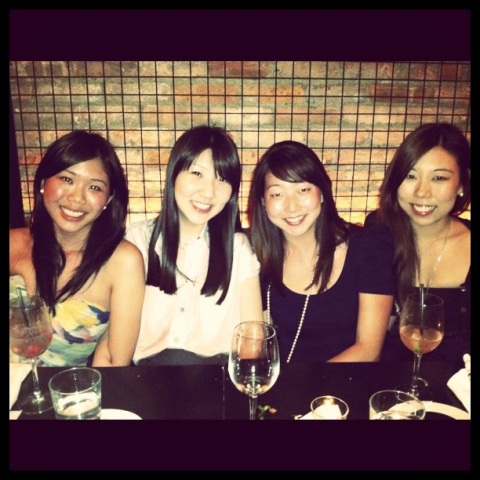 1. Don’t add too much of the chunky strawberry sauce to the frosting, try adding *only* the “chunks” of strawberry and as little liquid as possible.  I unfortunately didn’t do this, so it watered down my frosting so much so I couldn’t pipe it how I wanted to!

2. So now to completely go against #1, please DO add as much liquid as possible when filling each cupcake batter with the chunky strawberry sauce, and don’t be afraid to really pour it in. The cupcakes are a little dry without the extra boost from the sauce, so definitely feel free to add a heaping teaspoon of the sauce + liquid.

3. I reduced the sugar amount in the cupcake recipe below by 1/2 cup already, which was perfect for me, but if you have a sweet tooth, add 1/2 cup more. 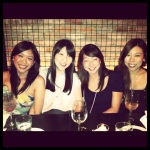 1. Heat the oven to 350°F and arrange a rack in the middle. Line 2 (12-well) muffin pans with paper cupcake liners; set aside.
2. Place the flour, baking powder, and salt in a medium bowl and whisk to aerate and break up any lumps; set aside.
3. Place the butter in the bowl of a stand mixer fitted with a paddle attachment and beat on medium-high speed until light in color, about 3 minutes. Add the sugar and continue beating until the mixture is light in color and airy, about 3 minutes.
4. Stop the mixer and scrape down the paddle and the sides of the bowl. On medium speed, add the egg whites 1 at a time, beating well after each addition.

5. Next add the eggs 1 at a time, beating well after each addition. Scrape down the sides of the bowl.

6. On low speed, slowly add the milk and vanilla and mix until combined (the mixture will look curdled). Add the reserved flour mixture and mix until just combined, about 15 seconds.
7. Fill each muffin well about three-quarters full. Using a spoon, create a small indentation in the batter by slightly spreading it from the middle out toward the edges. Measure 1 heaping teaspoon of the strawberry sauce and place the back of the teaspoon inside the indentation. Rotate the spoon, letting the sauce slide into the indentation. Repeat in each well.
8. Bake the cupcakes until a toothpick inserted in the center comes out clean, about 18 to 20 minutes. Set the pans on wire racks and let cool for 5 minutes. Remove the cupcakes from the pans and let cool completely on the wire racks before frosting.

Lately, I’m addicted to Daniel Klein’s Perennial Plate episodes from Season 1, a year in Minnesota.  He, along with his videographer/girlfriend Mirra, filmed a year-long web-documentary series about sustainable food and these weekly 5-minute videos are ridiculously entertaining and interesting. I suggest you start with Episode 50: A duck 5 ways, and then move on to Episode 9: Chickens and Eggs, then Episode 39: Frozen Eggs, and then…all of them.  They are going to begin filming season 2 “A Year on the Road” in May and I can’t wait to continue following their story and discoveries! They are awesome.

So I suppose it is a little ironic that I did not follow a very sustainable and local food-path when choosing to bake a strawberry country cake for my dad’s birthday.  At the very tail end of March. I have no excuses. But I will try and only make this again in May, when strawberries are actually in season. Watch out May and June birthdays!

I love whipping cream (both the noun and verb forms of it) and that brings me to share my little surprise…I caved and got the Kitchenaid Artisan 5-Quart Stand Mixer. In White.  I deliberated all day, accosting my poor friends on Google Chat and asking one of my bosses, what color to get this mixer, and after an almost definite Citron-choice, I chose White.  With the amazingness of Amazon Prime, I got it overnight for a $3.00 shipping fee. WHIPPING CREAM HAS NEVER BEEN BETTER OR MORE EXCITING!  And I was SO excited to try a little secret I learned while researching this recipe…the secret to make homemade whipped cream the best it can possibly be. Marshmallows. They are the “Viagra to homemade whipped cream.” Trust me.

A few notes about this recipe:

1. I halved Ina Garten’s original cake recipe because it doesn’t make sense.  She says it makes two cakes, and then you are supposed to freeze the second one and not use it. It’s very odd.  So, I halved it and it was the perfect amount, since you are supposed to cut the cake in half.

2. The cake itself: It is a coarser cake, with the kind of texture you would find in a great strawberry short-cake recipe.  I liked it a lot, it was very good and was a great compliment to the airy whipped cream.  I am going to try using a different cake recipe next time, however, perhaps something a little spongier and lighter, and I will let you know how it turns out!  In the interim, this cake is more than fine, and I highly recommend it.

3. I doubled the whipped cream quantities because 1 cup didn’t seem like enough.  It was a good call, it’s much better to have too much whipped cream than not enough!  And there wasn’t too much left over.

4. Try not to eat the strawberries when making this…like I did.  You might run out…almost like I did.

5. I cut the sugar in the whipped cream, since I added two marshmallows.  This was also a good call, it was the perfect sweetness.

7. This cake is where strawberries go to whipped cream heaven.

Cream the butter and sugar on high speed in the bowl of an electric mixer fitted with the paddle attachment until light and fluffy. On medium speed, add the eggs, 1 at a time, then the sour cream, zest, and vanilla, scraping down the bowl as needed. Mix well. Sift together the flour, cornstarch, salt, and baking soda. On low speed, slowly add the flour mixture to the butter mixture and combine just until smooth. DO NOT OVERMIX.

Pour the batter evenly into the pan, smooth the tops, and bake in the center of the oven for 30 to 35 minutes, until a toothpick comes out clean. Let cool in the pans for 30 minutes, then remove to wire racks and let cool to room temperature. The edges should slightly separate from the inside of the pan.

To make the filling for one cake, whip the cream, sugar, and vanilla in a mixer fitted with the whisk attachment until firm.  In a microwave-safe plate, heat 2 jumbo-sized marshmallows for 11 seconds and then immediately whisk into the cream.  Be amazed.

Enjoy.  This is really delicious.

You are currently browsing entries tagged with strawberry at my golden hour.