all of my adventures, mostly dogs, food, and good vibes.

This is so exciting.

Bianca Turetsky’s debut young-adult novel, THE TIME-TRAVELING FASHIONISTA is in stores TOMORROW!  This is an absolutely breath-taking book, with beautiful illustrations and an amazingly executed-concept. 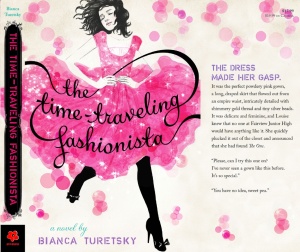 –Publishers Weekly on THE TIME-TRAVELING FASHIONISTA

“The Time Traveling Fashionista had me under its spell from the first page. It whisked me back in time to an era of impeccable manners, glamorous people, and of course, gorgeous clothes. Debut author Bianca Turetsky has begun an amazing new series.”

Seventh-grader Louise Lambert–obsessed with vintage clothing, but with only a few vintage outfits to her name–longs for excitement in her life. It arrives in the form of a mysterious invitation to the Traveling Fashionista Vintage Sale. When Louise finds the perfect dress there with the help of some eccentric saleswomen, she discovers that the “traveling” part of the sale is literal: upon trying on the dress, Louise passes out and awakens in the body of Alice Baxter (the dress’s former owner), a silent film star and currently a passenger on the Titanic. At first Louise enjoys her luxurious new life, not to mention wardrobe, but when she realizes she is on the ill-fated ship, she is up against the clock to either change the course of history or return home before it’s too late. First in a planned series, Turetsky’s debut breezily incorporates past and current pop culture references; with a spunky main character and breathless descriptions of glamorous clothing, it’s entertaining wish fulfillment for those as fashion-focused as Louise. Suy contributes full-color illustrations, not seen by PW.

Uncomfortable with her body and braces, seventh-grader Louise Lambert spends her time sketching outfits and daydreaming about the day when she’ll be glamorous. In between school and swim practice, she scours vintage shops and secondhand stores and teaches herself about fashion; she looks for both clothes and a connection to the women who wore them. While her classmates want to fit in, Louise wants to stand out, and she might just get her wish. After trying on a dress at a mysterious traveling vintage sale, she finds herself in another girl’s (fashionable) shoes…on the Titanic. Typical time-traveling conflicts—sexism, clothing, class issues, altering the course of history—ensue. Though the dialogue is occasionally stiff, the relationships possess some depth. Debut author Turetsky portrays Louise as a girl caught between childhood fantasies—Louise’s closet is “the only place left where she still felt the nervous anticipation that extraordinary and magical things could happen”—and the reality of growing up. While it doesn’t cover any new territory, the novel’s message of living life in the moment and accepting oneself provides some counterweight to the detailed fashion montage—presented throughout the book in delicate, color illustrations. Clothes, boys and adventure make for a quick series opener.

You are currently reading Bianca Turetsky – THE TIME-TRAVELING FASHIONISTA at my golden hour.